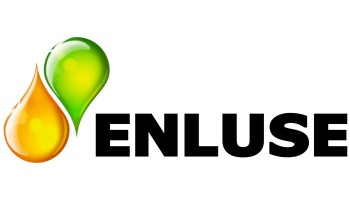 A grease lubricated bearing can be manually applied, automatically (semi or fully) applied, or lubricated for the life of the bearing. While many bearings are considered ‘lubed for life’, there are still many bearing that require grease on a periodic basis. The most common application to grease a bearing is with a grease gun. There are several varieties: lever action, pistol, and grip air powered.

The manual lever style grease gun is the most common. A typical, off-the-shelf shop gun can produce 7,500 to 15,000 psi. This can make the gun dangerous for bearing seals if misused. They typically hold 14oz (400gm) cartridges and produce various quantities/stroke. A best practice is to provide a stroke and weigh how much grease is produced. 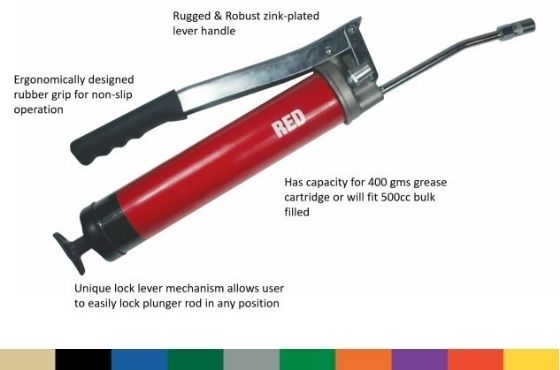 This manual pistol grip gun style can generate 3,000 – 10,000 psi of grease pressure and hold a 14oz (400gm) grease tube. They can produce various quantities/stroke and should undergo the same calibration as the level action style grease gun. 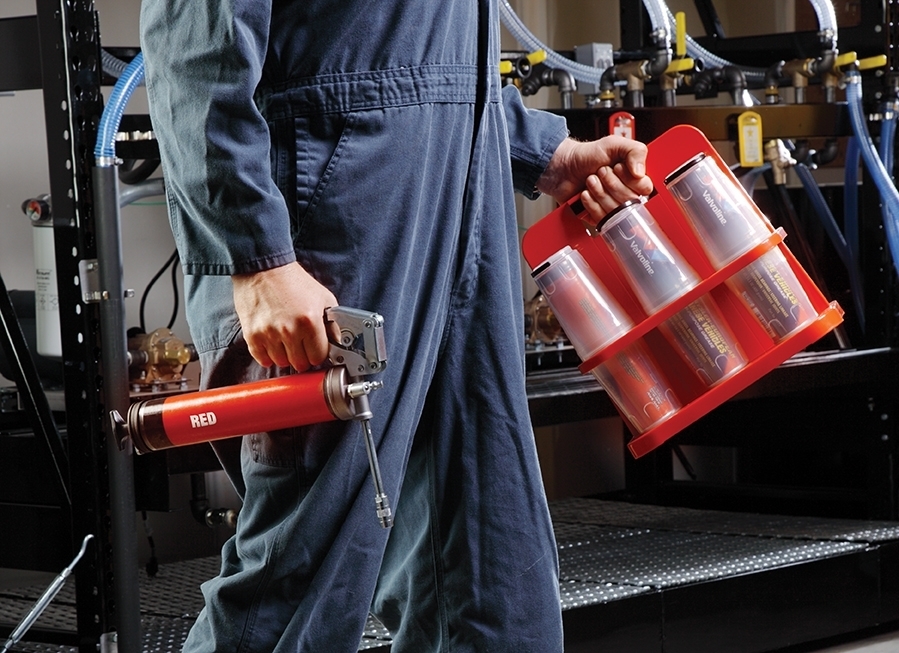 Air powered manual grease guns are used where many components operate within close quarters. These grease guns can generate 750 – 3000 PSI and are typically fitted off pumps from 400 lb. drums, 120 lb. keg and 35 lb. pail. This style produces various quantities/stroke from 0.1 oz to several ounces. The gun can be programmed with a volume meter for precise dispensing.

Modern electric grease guns generally use rechargeable batteries eliminating the need for power cords or, in the case of pneumatic guns, airlines adding convenience and versatility to the relubrication function. Rechargeable electric grease guns can produce up to 10,000 psi of pressure and deliver high volumes of grease quickly making them the grease gun of choice for those bearings that require more than several pumps from a manual gun.

In addition to bearings requiring a high volume of grease, the rechargeable electric grease gun meets the challenges of pumping grease long distances to remote bearings or those located in dangerous areas. They can also provide the volume and pressure to lubricate several bearings on a centralized manifold distribution system. 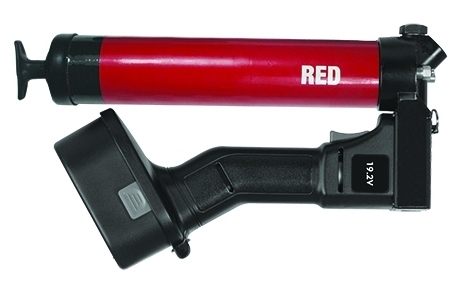 Regardless of the style grease gun, the bearing housing will be fitted with a Zerk fitting and is screwed into the housing or a pipe nipple extension off the housing. Grease is supplied under pressure until the required quantity is deposited into the housing 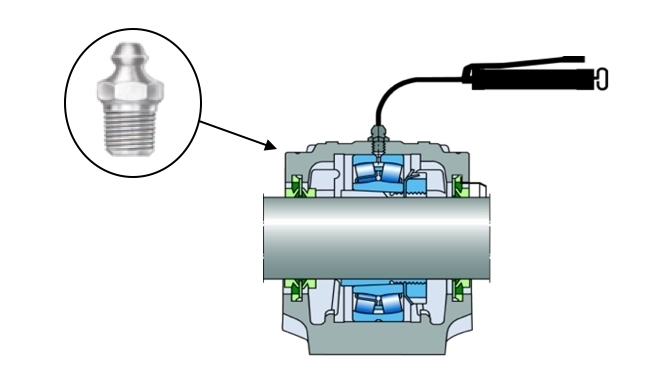 The grease cup is grease’s equivalent to a drop feed oiler. The ordinary screw-down type consists of a small reservoir for holding the grease and a plate that screws down into the reservoir. Grease is also applied by hand onto bearings and gears to protect them from rust and to ensure lubrication when the machine is started for the first time. Grease can be applied manually through grease fittings. Grease fittings must be wiped clean with a lint-free cloth to prevent dirt from being forced into the fitting when grease is applied.

The evolution of the grease cup is the electro-mechanical grease dispenser. These units dispense grease directly into a bearing using a small pump which controls grease flow independent of resistance. They can be a piston pump or a screw pump. These units are refillable, reducing long term use cost. They can be set with a timer with a cycle range from 14 days to 1 year. They can also be activated and deactivated as needed. They are less sensitive to temperature change, grease type. They produce moderate operating pressures (350psi). Some units are capable of multi-point lubrication and can be remote mounted for difficult to lubricate locations. 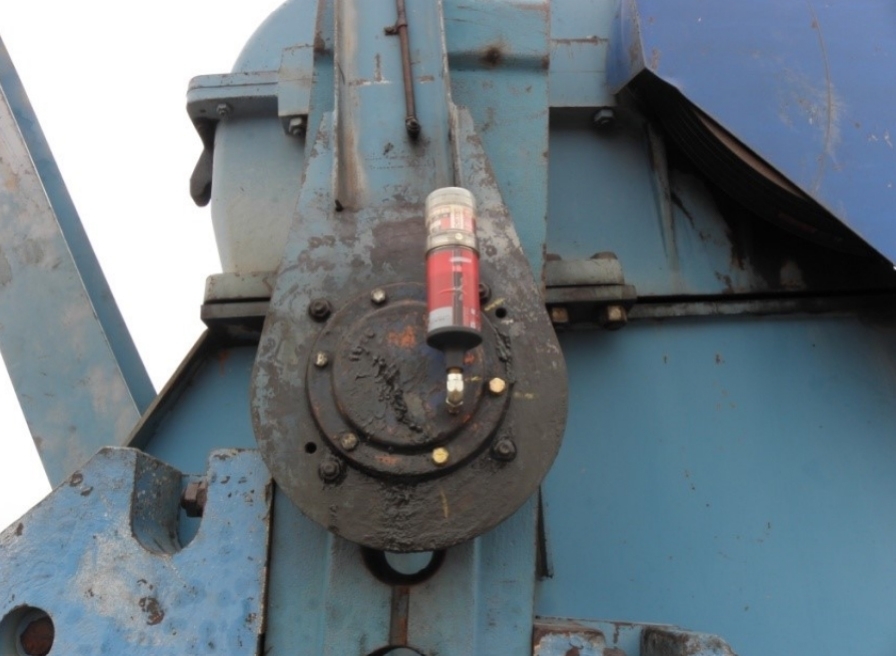 A semi-automatic lubrication is used where there are several components in close proximity, and the components need similar type, volume and frequency. An advantage is that grease volume is adjustable. The lines are fixed, permanently installed, and there is the opportunity for manual pumping. 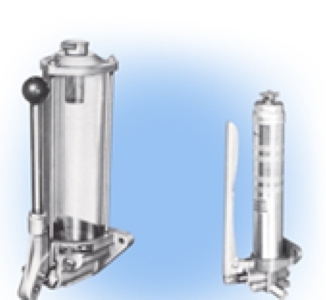 Variable and fixed volume grease blocks are used to regulate the volume per cycle to each. The pumps produce a minimum of 750psi to 3000 PSI. Grease quantity is based on a fixed output per cycle. The cycle must be set and maintained. If more grease is required, the cycle is shortened. A variable output block can be used. There are two types of designs: progressive and parallel. A centralized grease system is the best method for supplying grease to a large number of bearings on a machine, if it is properly serviced and maintained. Such a system consists of a centrally located grease reservoir with a pump and permanently installed piping having grease distribution valves through which grease is conveyed from the reservoir to the various bearings.

Centralised systems can be single line, dual line or progressive

Single line and dual-line systems consist of a reservoir, a pump, valves, and main line piping to which the measuring valves are connected. 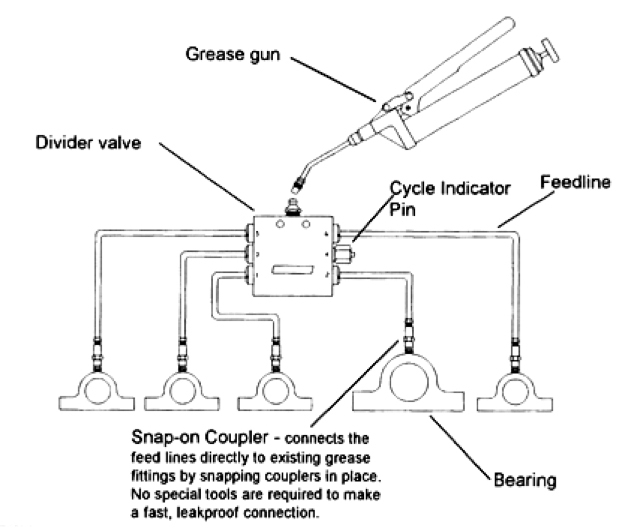 Another type of centralized grease system is the single line parallel. Typical characteristics include one header, multiple independently cycle injectors, and injectors may be various sizes. Central pressure and cycle control are a benefit along with the fact that they are easy to expand and are relatively inexpensive. 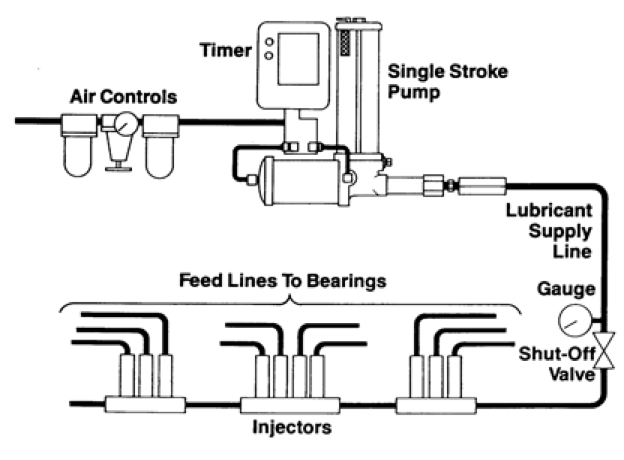 With the parallel system distribution block configuration, all porting is internal, but adjustable with movement of limiting screw. Grease volume is determined by the travel of the piston in the block body. A set screw can be raised or lowered to adjust the piston travel, increasing or decreasing grease flow per cycle. Grease requirements are calculated as part of the preliminary engineering and design but can be optimized after installation.